A division Bench of Chief Justice Vikram Nath and Justice Bhargav Karia also raised doubts over the govt’s claims about the availability of beds, testing facilities, medical oxygen, and Remdesivir 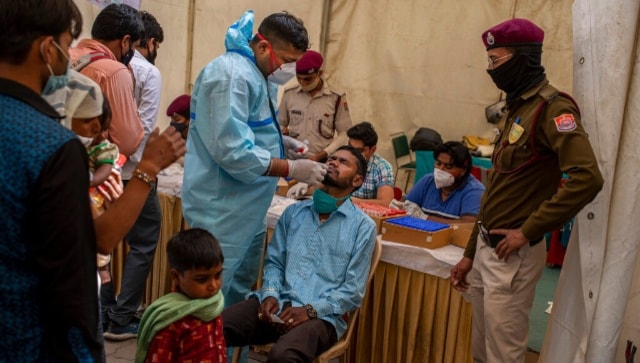 Ahmedabad: The Gujarat high court on Thursday pulled up the Vijay Rupani-led government, saying that the state was facing a tsunami of coronavirus

cases as it did not pay heed to the suggestions made earlier by the court as well as the Centre, and also because the dispensation was not as cautious as it should have been.

“In anticipation that the situation may get worse in the future, this court had in February made some suggestions. We told you to get ready with more COVID-designated hospitals, sufficient beds should be available, testing should be increased, make sure people wear masks and strict vigilance at public places, the bench said.

“But, it seems that the state government did not give due consideration to our suggestions. That is why we are seeing a Tsunami of Corona at present. Though the Centre was also continuously reminding the state about it, the government was not as cautious as it should have been,” it added.

It was hearing a PIL, taken up suo motu (on its own) a week back, about the coronavirus

situation and problems faced by the people.

In his response, Advocate General Kamal Trivedi assured the court that the state government was “serious” and doing everything possible.

On the issue of shortage of Remdesivir injections, a key anti-viral drug, Trivedi said the situation would improve in the days to come as the Centre has recently banned the export on the request of the Gujarat government.

When asked about the testing facilities, the AG informed the court that RT-PCR testing laboratories are there in all the districts, except in Dang.

However, Justice Karia asked Trivedi to crosscheck the government’s claims as he pointed out that there is no laboratory in Anand district and samples come to Ahmedabad.

As directed by the court in the previous hearing, Trivedi filed a status report in the form of an affidavit before the bench.

As mentioned in it, Trivedi told the court that out of 71,021 beds available in over 1,000 facilities across the state, COVID-19

patients occupy only 53 percent beds, while the remaining ones were vacant as on 12 April.

Not satisfied by the reply, the bench said, “We have serious doubts about this figure. You are saying only 53 percent are occupied. Yet patients are not being admitted. In that case, how can this figure be true?”

Trivedi explained that 71,021 beds include those created in Covid Care Centres.

Similarly, the high court appeared unconvinced about the government’s claim that it is doing its best to meet the demand of medical oxygen.

“Hospitals are not admitting patients who require oxygen. We have learned that oxygen is being black-marketed. Hospitals are misusing their quota. Oxygen is being siphoned off after getting approval for beds while patients are turned away claiming that it is not available, the bench said.

The high court also expressed concern over a new claim that even RT-PCR tests are failing to detect the infection due to the peculiar behaviour” of the new strains.

“That is why doctors are now relying on CT scans to detect it. Queues are getting longer at the CT scan centres.The government needs to think on that line too. You need to create more CT scan labs now, the bench said.

The court also asked the government to create a centralised portal to show real-time bed availability across Gujarat so that people do not run from one hospital to another in search of beds for their relatives.