As India battles a second COVID-19 wave and states go for lockdown, election rallies and the Kumbh Mela in Haridwar continue, compromising all efforts to curb spread of COVID-19 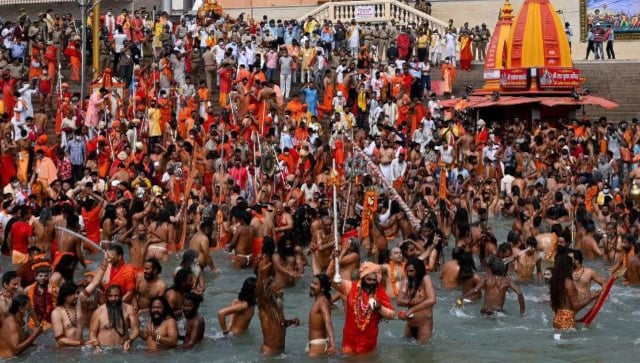 Devotees take a dip in the waters of the Ganges River on the day of ‘Shahi Snan (royal bath)’ during the ongoing religious Kumbh Mela festival, in Haridwar on Monday. AFP

The second wave of COVID-19

in India has proven to be more challenging and aggressive than the first wave of the pandemic, which led to a nationwide lockdown in March last year.

Just over three-and-a-half months into 2021, the daily cases have not only surpassed the high reported in 2020 but more than doubled. The impact of the pandemic is clearly visible across the country with bodies piling up in crematoriums and long queues of ambulances outside hospitals.

The impact of the pandemic is being felt not just in the metro cities, but also in smaller towns — with shortages being reported of beds and oxygen supplies.

However, despite the severity of the health crisis, election rallies and religious congregations like the Kumbh Mela in Haridwar have continued, raising questions over the seriousness to tackle the spread of the deadly virus.

It is only Saturday that the organizers of the Kumbh Mela exhorted people not to congregate in large numbers in Haridwar, after an appeal from Prime Minister Narendra Modi.

These two events have also emerged as super spreaders with daily cases seeing an over 4,000 percent increase between 1 February to 16 April in some states and tripling in others. In West Bengal, where polling for the fifth phase for 45 seats is underway, COVID-19

cases have seen a jump of 3,489 percent in just seven weeks. The state had reported 198 cases on 1 February, but on 16 April, it touched 6,910. Seventeen people died from the virus on Friday. Elections in Bengal are being held in eight phases with voting for the remaining three phases are yet to take place.

Though no other state has seen as exponential a rise in cases as Bengal, the COVID-19

situation is equally worrying in Tamil Nadu, Kerala, Assam as well as the Union Territory of Puducherry — all of which have seen a spike in cases following campaigning for the Assembly polls.

Assam where elections were held in three phases with the first phase on 27 March, second phase on 1 April and third phase on 6 April, the daily cases jumped from 13 on 1 February 2021 to 573 on 16 April. This is a 4,407 percent increase in daily cases in just over two and half months.

Over 48.51 lakh people have thronged Haridwar, an important pilgrimage place for the Hindus, for Kumbh Snan, which occurs once in 12 years, following planet Jupiter’s transit in Aquarius (Kumbh) sign.

Despite their best efforts, the police could not impose the standard operating procedures (SOPs) on the seers of akharas and the ash-smeared ascetics thronging Har Ki Pairi ghat on the two major bathing days due to severe time constraints.

in the Kumbh Mela area in Uttarakhand’s Haridwar, confirming fears that one of the world’s largest religious gatherings may contribute further to the rapid rise in coronavirus

Several steps have also been announced to curb the spread of the virus in the Kumbh Mela as well in election rallies.

Modi tweeted that he spoke to Swami Avdheshanand Giri of Juna Akhara over the telephone and inquired about the health of saints, many of whom have contracted the infection, and also conveyed his appreciation for their cooperation with the local administration.

Several seers too have come out in support of the prime minister’s appeal. Some states like Karnataka have already announced guidelines for districts and municipal corporations when it comes to Kumbh Mela returnees.

Taking a serious view against repeated violations by star campaigners, political leaders and candidates “who are supposed to be torchbearers for the campaign against COVID-19

“, grossly violating the health protocols, exposing themselves as well as the public to the danger of the infection, the Election Commission on Friday curtailed campaigning timings as well increased silence period before polling day to curtail the spread of the virus.

However, seeing the rise in cases, one can only hope that it’s not already too late for damage control.