Apps like MFine’s are looking to boost health awareness, empower its users to track conditions that require medical devices to help manage. 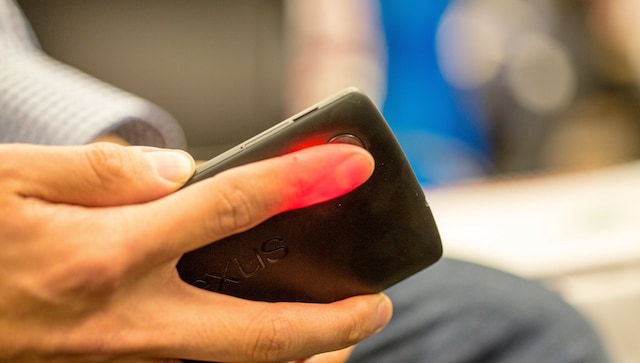 The mobile app is not intended to replace oximeter devices, which remain the most accurate way to measure oxygen saturation. Image: Dennis Wise/University of Washington

era. Gone are the days people queued for hours outside pharmacies, paying the asking price for sanitizers, pulse oximeters and PPE when the pandemic had just hit. Many companies took to the drawing board to come up with solutions to quarantine living and work-from-home. Bangalore-based digital health startup MFine was among those who jumped at the challenge, with an app-based tool to monitor oxygen saturation (SpO2) levels using nothing more than a fingertip, a smartphone camera and a flash.

Currently in beta testing for Android users, the tool – dubbed MFine ‘Pulse’ – is due to make its iOS debut in a few weeks. Even as clinical trials for the tool continue, the tool appears to be promising, with accuracy levels of 80%, as per a press release. In the company’s Android beta roll out, thousands of users are using the tool, producing hundreds of readings everyday that are fed to a machine learning algorithm – something the company’s CTO Ajit Narayanan says will undoubtedly improve the tool’s accuracy in the months to come.

“For now, the goal is to make our SpO2 monitoring tool as accurate, if not more accurate, than pulse oximeters available at the pharmacy,” Narayanan said.

The SpO2 tool uses a signal called the photoplethysmogram (PPG) – information, in the form of reflected light that is collected from a user’s fingertip or wrist. This is similar in mechanism to the PPG function in Apple Watches. While Apple’s proprietary tech allows users to also obtain an “ECG” report that helps doctors monitor irregular heart rhythm among other heart ailments, MFine’s proprietary tech gives users a window into a vital indicator of respiratory health. It uses light from camera flashes to produce an optical image using light sensors that are built-in to smartphone cameras. When they aren’t fuelling our Instagram habits, these sensors can also measure changes in the way light is absorbed. The signals picked up by the camera lens are broken down into Red, Blue or Green elements based on how much light is absorbed by the blood vessels under the skin in these wavelengths of light. This information is then fed to a machine learning algorithm developed by MFine, which ultimately produces an SpO2 reading. The MFine app at a glance (L); instructions for users of the SpO2 tool, and the tool itself (R). Image: Screenshots from MFine

Over time, these apps will get more accurate and more commonplace, Narayanan says. A vital part of MFine’s efforts to make the mobile-based SpO2 tool more accurate, machine learning can study patterns of data or numbers collected by instruments.

“So you’ve collected a sequence of numbers from a PPG, but what does this mean to a consumer? ML can make these predictions fairly well,” Narayanan said. “Oxygen saturation, for instance, is something you can train a model to do. The model is developed with a series of patterns, including variations, that decide whether a user’s condition is normal or abnormal.

It will be able to predict an outcome, with a high degree of accuracy, so long as the model itself is made well. But a smartphone-based SpO2 tool is unlikely to replace actual medical devices in the near future, according to Narayanan.

“We can’t replace a medical device with an app using today’s technology – that leap could take place years and years from now. But, you can get a reading almost instantly without that device today, with a margin of error close to that a medical-grade device can give you,” he says. “The idea is that everyone can measure their oxygen with a fair degree of accuracy.” 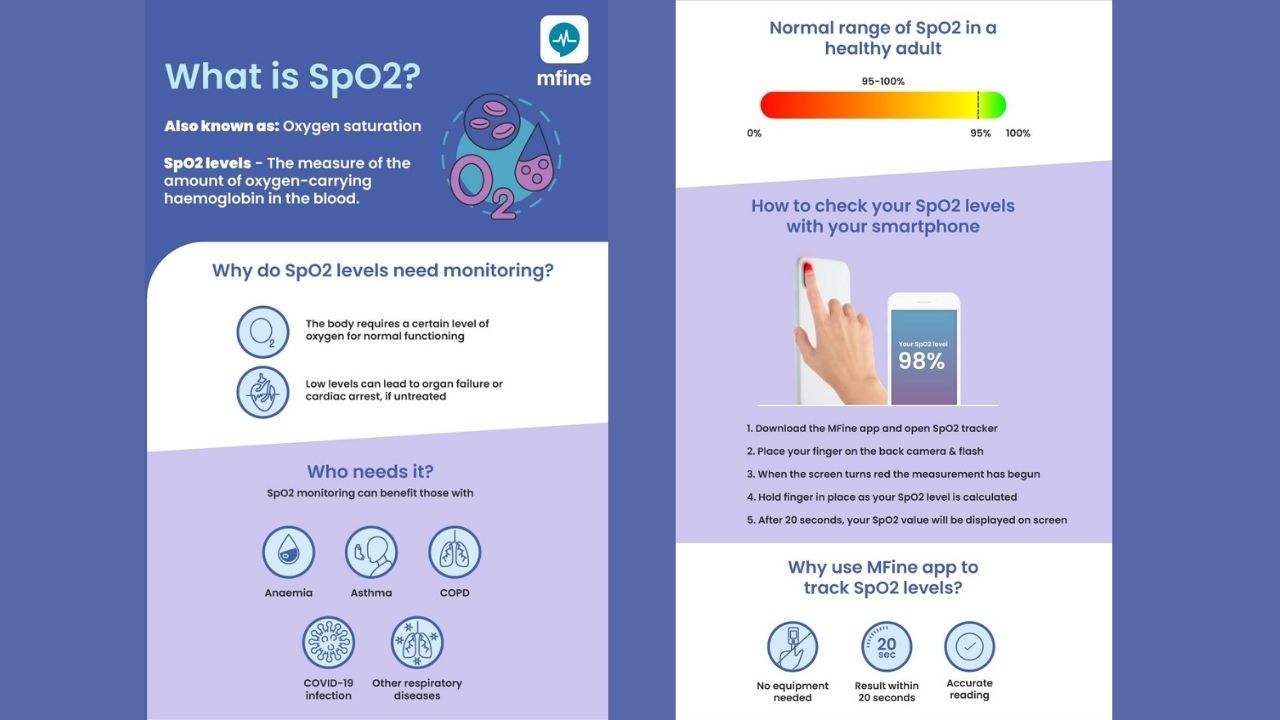 The human body requires and regulates a very precise and specific balance of oxygen in the blood. Image: MFine

Among the must-haves for at-home COVID-19

monitoring, pulse oximeters have long been a useful tool in respiratory health surveillance. Blood oxygen reveals how much oxygen our red blood cells are carrying, a function that is tightly-regulated by the body. A balance of oxygen-saturated blood with deoxygenated blood is vital for normal functioning, but most people – adults and children – don’t need to monitor it regularly. Doctors, too, might not check SpO2 unless you’re showing signs of respiratory distress, like shortness of breath or chest pain. But for people with chronic health conditions like asthma, heart disease, and chronic obstructive pulmonary disease (COPD), and now COVID-19

, blood oxygen levels can be an essential indicator of health. It can even help make treatment decisions like which method works, and whether the dose needs to be adjusted.

A less-than-normal blood oxygen level – a condition known as hypoxemia – is more often than not, cause for concern. The lower a person’s oxygen level, the more severe the hypoxemia, and the higher their likelihood of serious complications to vital organs and their overall health.

For now, the goal with apps like MFine’s is to increase awareness about the user’s own health – make it easier for people to monitor some medical conditions that require a device to track something that’s going on inside the body. The Pulse SpO2 tool is one in a sea of growing efforts to democratise healthcare, and offer on‑demand access to sensors and software wouldn’t otherwise be within arm’s reach.

In the long run, MFine hopes to widen its telehealth offerings, and convert the mobile phone into a tool that can manage a range of diagnostics and monitoring of vitals. With more access to mobile phones & wider internet coverage, the smartphone is undoubtedly becoming a multifaceted tool. Could it be the new “examination tool” for your vitals?

It’s only a matter of ‘when’, according to Narayanan. The wealth of information it could give doctors, researchers and citizens alike could be a powerful push in the COVID-19

era and beyond; where healthcare literacy and awareness about how daily choices impact health could boom like never before.