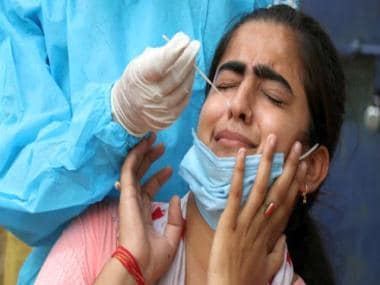 With a single-day jump of 64 Omicron cases, India now has 3,007 cases of the new variant. Omicron has been reported in 27 states, with the most cases in Maharashtra with 876 cases, followed by Delhi with 513 infections

India on Saturday registered 1,41,986 new coronavirus cases, highest single-day spike since May last year, as the nationwide surge in infections propelled by the Omicron variant continued to soar.

Active cases have grown multifold in a week as a new wave of the pandemic gripped the nation. The country now has 4.72 lakh active cases, up from around 77,000 in the last week of December.

With a single-day jump of 64 Omicron cases, India now has 3,007 cases of the new variant. Omicron has been reported in 27 states, with the most cases in Maharashtra with 876 cases, followed by Delhi with 513 infections.

Of the total Omicron cases reported till now, 1,203 people have recovered or migrated.

Seven more fatalities were recorded in Delhi on Saturday due to COVID-19 as the city clocked 20,181 infections in a single day, while the positivity rate rose to 19.60 percent, according to data by the health department.

The caseload in the country’s financial capital rose to 8.95 lakh while death reached 16,399. Mumbai now has 1,06,037 active cases as 6,003 patients were discharged during the day.

The BMC statement also informed that 82 percent or 16,661 of the patients detected during the day had no symptoms.

Karnataka has recorded 8906 fresh COVID-19 cases, 508 discharges, and four deaths in the past 24 hours. Active case tally in the state now stands at 38,507. Bengaluru alone has reported 7,113 infections and three fatalities, and the city’s positivity rate has crossed 10 percent.

In West Bengal, 18,802 fresh infections have been reported. The state has registered 8,112 recoveries, and 19 deaths in the last 24 hours.

Kolkata alone accounted for 7,337 new cases and North 24 Parganas for 3,286, the state health department said in its bulletin.

The daily positivity rate in Bengal at present is 29.6 percent. There are currently 62,055 active cases in the state.

The third wave of the pandemic across all states is being driven by the fast-spreading Omicron variant, official sources said, citing the latest data.

Till a few days ago it was only in the western region of the country that the surge in Covid cases was due to Omicron, while in the northeastern states, West Bengal, Chhattisgarh and Odisha the Delta variant was predominant. However, the latest data suggests that all eastern states have also reported high numbers of Omicron cases.

“So going by that it can be said that the third wave of COVID-19 pandemic across all states is being driven by the fast-spreading and highly transmissible Omicron variant,” the source said.

The Centre has also asked states and union territories to review infrastructure preparedness, including re-establishment of field/makeshift hospital facilities to avoid any shortage in the eventuality of a potential surge in hospital admissions due to COVID-19.