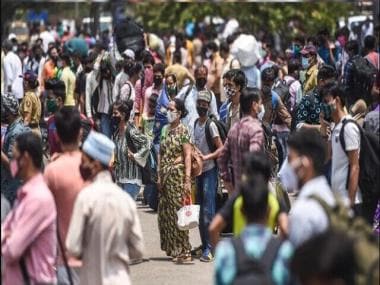 India on Friday witnessed an exponential surge in COVID-19 cases after 1,17,100 fresh infections were recorded – a 28 percent jump from yesterday’s 90,928 cases – as the virus continued to spread at an unprecedented pace

India on Friday witnessed an exponential surge in COVID-19 cases after 1,17,100 fresh infections were recorded – a 28 percent jump from yesterday’s 90,928 cases – as the virus continued to spread at an unprecedented pace, mostly driven by the Omicron variant. With this, the total caseload climed to 3.52 crore.

India has confirmed 3,007 cases of the highly-transmissible Omicron variant from 27 states and Union territories so far. While Maharashtra tops the chart with 876 cases, Delhi has detected 465 cases. Meanwhile, Karnataka has 333 cases, Rajasthan 291, Kerala 284 and Gujarat 204.

Let’s take a look at the COVID-19 figures in the major metro cities today:

Delhi on Friday recorded 17,335 fresh cases, the highest single-day rise since 8 May 2021, and nine deaths, while the positivity rate mounted to 17.73 percent, according to data shared by the city health department.

This is a significant rise from Thursday when the city recorded 15,097 new cases at a positivity rate of 15.34 percent.

This is the highest single-day rise since 8 May when 17,364 cases were logged with a positivity rate of 23.34 percent. As many as 332 deaths were also recorded on that day.

With the latest addition, the cumulative caseload has gone up to 15.06 lakh while the toll rose to 25,136. The number of active cases in the capital now stands at 39,873.

The city also saw six deaths due to the pandemic, highest in a day in the last two months, said a BMC release.

Speaking to a Marathi news channel, Mumbai municipal commissioner Iqbal Singh Chahal said a new wave of the pandemic began from 21 December, 2021, when the city recorded 327 new daily cases. Since then, cases have risen 6,313.14 percent.

Chahal, however, maintained that there was no need for lockdown as the death rate, bed occupancy and medical oxygen demand were low.

Chennai contributed the maximum cases (3,759) of the total 8,981 fresh infections reported in Tamil Nadu on Friday. Other districts including Coimbatore (309), Vellore (223), Kancheepuram (185) also witnessed a sharp rise in cases.

Meanwhile, Tamil Nadu BJP president K Annamalai said that a Pongal event, to be attended by Prime Minister Narendra Modi, on 12 January has been deferred due to COVID-19 restrictions.

However, it’s not clear if an event in Virudhanagar, where the PM will share stage with CM MK Stalin for the inauguration of 11 new medical colleges in the state, will take place as planned.

The spike in cases in Karnataka was driven by Bengaluru Urban which contributed 6,812 infections of the 8,449 cases reported in the state on Friday.

The Union Health Ministry in a notification on Friday said that all international travellers will need to undergo seven-day mandatory quarantine on arrival in India, even if they test negative for COVID-19 at the airport.

They will then have to undertake an RT-PCR test on the 8th day of arrival in the country.

Over 150 crore vaccines administered so far

Terming it a “historic achievement”, Union Health Minister Mansukh Mandaviya said it could be attained only because of the relentless hard work of healthcare workers under the “able leadership of Prime Minister Narendra Modi”.

“When everyone makes efforts together then any goal can be achieved,” Mandaviya said in a tweet in Hindi.