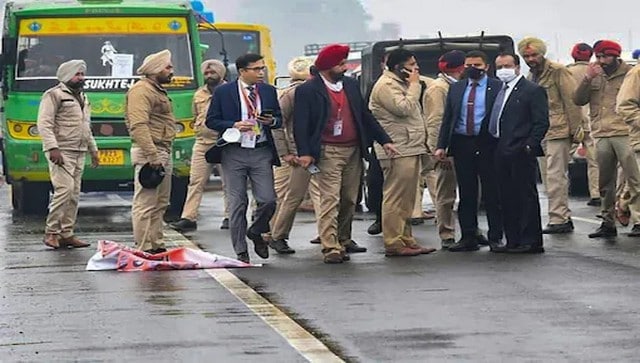 Police personnel and officials at the flyover where Prime Minister Narendra Modi’s convoy was stuck for 2o minutes due to a blockade by a group of protestors, in Punjab’s Ferozepur. PTI

The security breach in Prime Minister Narendra Modi’s cavalcade in Punjab and the reactions that followed especially from the Congress, have serious implications for the federal polity of our country. Notwithstanding party affiliations, the Centre and the states are expected to work together in all areas. There are bound to be frictions due to conflicting political interests and rivalry for power amongst different parties. However, there is still a balance that needs to be maintained. What happened in Punjab on 5 January and the subsequent reactions of the state administration and the party ruling it indicated a complete breakdown of this federal equilibrium. That doesn’t augur well for India as a democracy.

Punjab is ruled by the Congress. Punjab Congress chief Navjot Singh Sidhu termed this incident “drama”, while Chief Minister Charanjit Singh Channi brushed it off casually. Congress spokesperson Randeep Singh Surjewala spelled out the party’s stand on this issue a few hours after the breach: “Did anyone attack PM’s convoy?” He also said that the heat and dust being raised over this issue was merely a “political drama”.

In the history of Indian polity, this probably would be one the darkest episodes where the Congress breached a certain line of sanctity. It might be good for their politics but it’s bad for Indian polity. Because it isn’t about an individual; it’s about the institution of the Prime Minister. The Congress undermined this institution by shelling out statements that further attacked the prime minister, instead of apologising for this incident.

This poses a larger question: Why has the Congress taken such a defiant stand? Is it something new, or is this stand rooted in the party’s past? Does the Congress have faith in the federal structure of this country? As the age-old cliché goes, “Actions speak louder than words.” Let’s take a brief look at the Congress’ past in this context.

A close look at the past record of the Congress leadership shows that starting from Jawaharlal Nehru, the Congress has undermined the principles of federal polity. Since 1950, Article 356 (President’s Rule in a state) has been imposed 132 times. Out of this Congress used it 93 times to dismiss state governments. The first time this article was used was in Punjab itself. Nehru, who was the Prime Minister as well as the Congress president, used Article 356 in Punjab in 1951 to dismiss the government led by Gopichand Bhargava even though he had a majority in the Assembly.

Since then there had been no looking back for the Congress. Successive Congress governments at the Centre misused it weakening the Indian federal structure, be it introducing Article 370 or pushing the first amendment to the Constitution in an undemocratic manner. Another major blow to our federal structure from Congress was the Emergency imposed by Indira Gandhi from 1975-77. Opposition governments were summarily dismissed before packing off all those opposing Emergency to prisons across the country.

It is time to recall how Congress president Rajiv Gandhi had sent a letter from Bangalore airport to sack its own Chief Minister Veerendra Patil in 1990. And that too when Patil was credited with bringing the Congress back to power! No chief minister or state leadership in any other party have been treated like this in their own party. It reminds one of the way Captain Amarinder Singh was recently made to step down from the post of Chief Minister by the present Congress leadership. The two tenures of the United Progressive Alliance governments at the Centre between 2004 and 2014, led by Congress, witnessed undermining of the federal principles as the kitchen cabinet was resurrected in the form of the National Advisory Council. Several states that were ruled by the Congress’ rival had repeatedly complained about discrimination by the Centre during the UPA tenure.

The Narendra Modi-led Bharatiya Janata Party government tried to restore this imbalance caused by the Congress in our federal polity The most recent example is the way the Centre provided aid to all the states during the Covid-19 pandemic. The Prime Minister was constantly in touch with all the Chief Ministers and the authorities concerned at the Centre worked in close coordination with the state governments without bothering which political party was in power there.

However, the Congress’ stand on the breach of PM’s security in Congress-ruled Punjab has come as a jolt to the ongoing efforts to strengthen our federal structure. The Congress leadership probably can take a leaf out of the Sarkaria Commission’s report on Centre-state relations. The Commission was set up in 1983 to revisit Centre-state relations and it gave its final report in 1988. The Commission said, “The Constitution of India envisages two tiers of government, one at the level of the Union, and the other at the level of the states. From the functional standpoint, such a Constitution is not a static format, but a dynamic process. Within this process, the interplay of centrifugal and centripetal forces influenced by a changing social, economic and political environment, constantly strives to find a new adjustment of the balance between unity and diversity. The very dynamism of the system with all its checks and balances brings in its wake problems and conflicts in the working of Union-state relations.”

The commission added, “Stresses, strains and irritations generated by such problems may stifle the working of the system and endanger the unity and integrity of the country. It is, therefore, necessary to review from time to time, in the light of the past experience, the evolution of Union-state arrangements not only for the purpose of identifying persistent problems and seeking their solutions, but also to attune the system to the changing times so that propelled by a spirit of common endeavour and cooperative effort it takes the country ever forward towards the social welfare goals set out in the Constitution.”

The Commission, while summing up the challenge faced by our federal polity due to Congress, said: “As the old guard of the pre-Independence days began to vanish from the political scene by sheer efflux of time, the composition of the Congress party underwent a change particularly in the states. The new political leaders were distinctly different from their predecessors. They were younger and not steeped in the Gandhian traditions of the pre-Independence era. Political life was not seen as in the days of the freedom struggle, as a sacrifice for the nation. Rather, it became a political career and a means of reaching for power and pelf in varying proportions. It was no longer the lawyer or doctor sacrificing a lucrative practice or the teacher throwing up his calling to join politics. It was the local leader commanding money, muscle power and caste or communal loyalties who came to the forefront of state politics. In a sense, this process was inevitable with the growing vacuum at the top and the new mores and ethos of electoral politics which afforded no place — and gave no quarter — to those who did not acknowledge the new rules of the game.”

So, is it too much to expect from the Congress that it would respect and strengthen the federal polity of our country rather than trying to weaken it? Or, as Mirza Ghalib said: “Ham ko un se vafā kī hai ummīd, jo nahīñ jānte vafā kyā hai” (From her I hope for commitment, who knows it not, to my dismay).

The writer, an author and columnist, has authored several books on RSS. Views expressed are personal.